This week we began work on a long-term project - to reimagine and reinvent the Wizard of Oz characters in the style of artist Tim Burton.

I joined lead Paul Salas' team to focus on the poses, attitude and animation for the character. We were assigned to work on the Cowardly Lion character. This first week, we focused on populating a Pinterest board to nail down our artistic direction.

I worked on populating the board Animation/Poses/Attitude as seen below.

I then narrowed the selection down to four poses that I felt emulated the feel of the character we were after. The lion will be poses in a crouched over position, looking anxious/fearful, holding his tail in and keeping his hands near his face (perhaps biting his nails?) 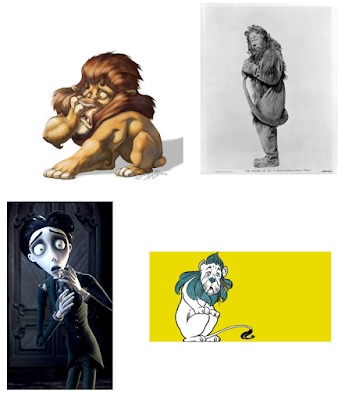 I also included an interesting GIF I found that served well to conceptualize how this lion might be animated in the future. I proposed that his animation style would be stylized in the fashion of smooth, crisp, controlled arcs paired with an uncontrollable shakiness.

Email ThisBlogThis!Share to TwitterShare to FacebookShare to Pinterest
Labels: VR